St. Innocent Orthodox Christian Cemetery is founded as an expression of our Christian love for one another. St. Nikolai Velimirovic, in his homily for the Sunday of the Myrrh-bearing Women, poetically writes:

"Man is sublime when he cares for the living; Man is more than sublime when he cares for the dead. A man often cares for the living out of selfishness. But what selfishness can there be in a man’s caring for the dead? Can the dead pay him, or express their gratitude? Some animals bury their dead; giving them to the grave, they give them over to forgetfulness. But when a living man buries a dead one, he buries a part of himself with the dead man and returns home carrying a part of the dead man in his soul. This is especially clear – terribly clear –when a kinsman buries a kinsman, and a friend a friend. Death has one characteristic in common with love: it, like love, works a profound change in many that experience it and go on living."

As Orthodox Christians, we care for the human person from the womb, to and even in, the tomb. As a holistic incarnational faith, our concern is for people’s bodies as well as their souls. We hope that our cemetery will be a ministry to the living and the dead. To the young and full of life it will be a place to visit their loved ones who have passed. To those in the process of dying, it is a place of rest where they know they will be prayed for, visited, and remembered. A burial ground on Church property expresses the unity of the One Church, composed of the living and the dead, as they “look to the Resurrection of the dead and the life of the world to come.” On Saturday and Sunday, September 3/4, St. Innocent Orthodox Church celebrated 20 years since our founding in Macon, GA. His Grace Bishop Alexander was with us for the celebration. On Saturday we started with a Moleben of Thanksgiving followed by an informal get together and finished with Great Vespers. On Sunday we served the Hierarchial Liturgy. Three readers were tonsured and a Diocesan Gromata was given. It was a beautiful weekend. May God continue to grow and establish our humble church! 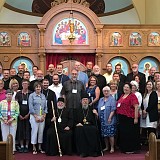